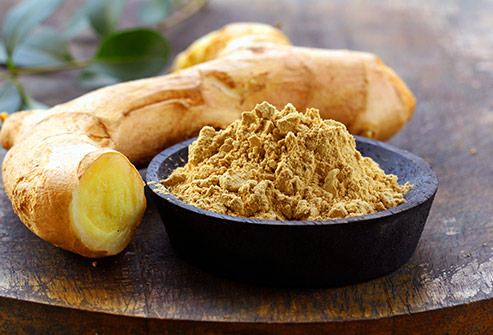 A staple of traditional medicine, this pungent root is probably best known for its anti-nausea, stomach-soothing properties. But ginger can also fight pain, including aching joints from arthritis as well as menstrual cramps. One study found ginger capsules worked as well as over-the-counter anti-inflammatory drugs like ibuprofen at relieving period pain.

Pepitas are a terrific source of magnesium, a mineral that may cut the number of migraines you get. It may also help prevent and treat osteoporosis. But despite what you may have heard, it doesn’t seem to stop leg cramps at night. For more magnesium, add almonds and cashews, dark green leafy vegetables (like spinach and kale), beans, and lentils to your diet.

Loaded with anti-inflammatory omega-3 fatty acids, salmon makes just about all of the “good for you” lists. It’s considered heart-healthy and may relieve joint tenderness if you have rheumatoid arthritis. Other varieties of cold-water fish, including tuna, sardines, and mackerel, are good choices, too. Avoid tilapia and catfish, though: Their higher levels of omega-6 fatty acids may promote inflammation.

Feel that peppery tingle in the back of your throat? That’s a compound called oleocanthal, and it works like ibuprofen. Extra-virgin olive oil also has lubricin, which keeps joints sliding smoothly and protects cartilage from breaking down. It might help people with osteoarthritis. Stick to lower temperatures (less than 410 degrees) when you cook with olive oil so you don’t lose any of its many benefits.