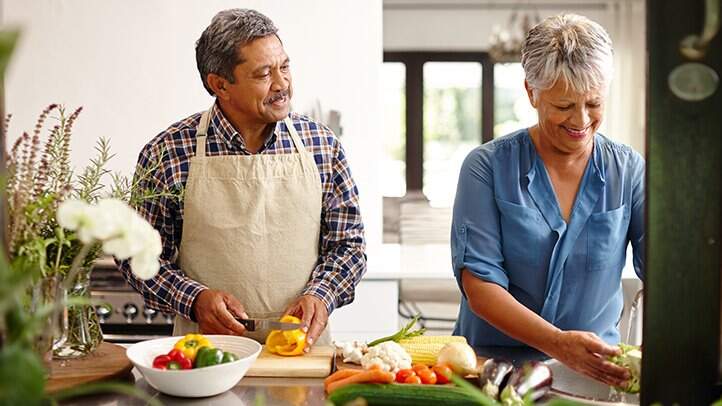 You’ve decided to become newly committed to getting healthy to lose a little weight. You wish your partner was on board, but he or she has no interest in going on a diet. That’s okay — it’s likely they’ll slim down, too, concludes a new study.

The research, published in February 2018 in the journal Obesity, looked at 130 married couples. In each, one overweight or obese spouse was enrolled in Weight Watchers. After six months on the program, the nondieting partner also lost a modest amount of weight — about 5 pounds (lbs) — compared with a control group.

Even better, 32 percent of the nondiet spouses lost at least 3 percent of their initial body weight over this period of time. That’s significant, given that someone can reduce their risk of developing type 2 diabetes by losing just 5 to 7 percent of their body weight, according to the Centers for Disease and Prevention (CDC).

There are likely two things at play here, explains study coauthor Amy Gorin, PhD, professor of psychological sciences at the University of Connecticut in Storrs. “You start eating healthier, so your spouse may be motivated to do so as well. Also, if you’re responsible for grocery shopping or cooking, you may bring healthier foods into the home, so they may lose weight by being surrounded by a healthier environment,” she says.

To put this principle into practice at home, make healthier changes in a subtler way, suggests McKittrick. That means no bragging about your discipline, which can be off-putting. “Buy healthy food, make tasty substitutes, like cauliflower rice or zucchini noodles with meat sauce, and find new, fun food products,” she says, adding that the emphasis should be on being healthy rather than “dieting.”

Bottom line: Even if your spouse isn’t on board with your new healthy lifestyle, it may not matter. “This study suggests that your spouse will likely benefit if you lose weight yourself,” says Gorin. “So, if you are concerned about your spouse’s weight, focusing on your own weight management might prompt your spouse to lose weight, too.”